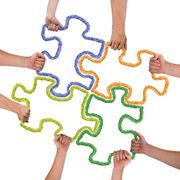 The Clay SafetyNet Alliance is a network of Clay County nonprofit, faith-based and local government agencies which bring services and support to the county’s 200,000 residents. Not only is this network a safety-net of social services, but recently it merged with Shaping Clay, which is a network of enrichment programs in the community. There are over 140 nonprofits that file taxes and use a Clay County address for their filing.

The Clay SafetyNet was founded in 2003 as the Mercy Network of Clay County. This dedicated group of faith-based, nonprofit and local government organizations met monthly to share resources and avoid duplication of services. In 2010 a crisis arose when there was no housing in Clay County for families who lost their homes due to foreclosure. The members of The Mercy Network took on the project of establishing housing for these displaced families.

In 2012, the members of The Mercy Network formed a 501(c)(3) nonprofit called, Mercy Support Services which now manages 3 quadruplexes for displaced families and individuals, has a full-time case manager, operates a Resource and Referral Call Center and is able to guide displaced people to self-sufficiency.

The Mercy Network having plans to take on even more projects, expand outreach to other county stakeholders, was faced with confusion due to a similar name with the nonprofit Mercy Support Services. To dispel this confusion, a new name was adopted – The Clay SafetyNet Alliance.

The Clay SafetyNet Alliance is now actively connecting with other stakeholders such as the Emergency Operations Center, the Sheriff’s Department, the Health Department, the School District, for profit businesses, and an expanding number of nonprofits. Linking to other networks such as the Clay County Chamber of Commerce, the Economic Development Corporation, Shaping Clay, and the Clay Action Coalition only strengthens their ability to leverage the impact of their collective efforts.

Clay County nonprofits are 5% of the workforce, and in 2015 provided more than $33 million in direct program delivery to Clay’s residents. This was accomplished by earning $2.4 million in fundraising, securing $30 million in grants and contributions, and collecting $4 million of in-kind donations.

The Clay SafetyNet meets monthly at Haven Hospice - 745 Blanding Blvd. Orange Park FL 32065 on the 3rd Thursday of every month from 8:30 to 10:00 am. Their goal is to bring people together in order to collaborate and continue solving short-term community needs by sharing resources and avoiding duplication of services. In addition, they focus on expanding communication, creating a framework to proactively address community problems, and championing common projects that will benefit the whole county.